Sharon cruises the Danube with Tauck 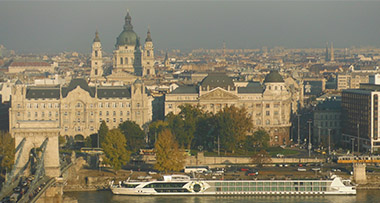 Sharon has recently returned from her Tauck Academy River Cruise along the Danube, during which she experienced the Tauck difference in river cruising, and also became a certified Tauck agent. Here's her diary...

I arrived at Budapest Airport just before midday and was met and transferred to the M.S. Treasures for my trip on the Danube, which was approximately a 25 minute journey to ship. I was greeted with a drink on arrival and my luggage was taken to my cabin. Our group of 50 agents then had a light lunch in the Compass Rose before departing for a highlight tour of Budapest by coach. We were allocated our Vox devices which enabled us to listen to the guide through an earpiece, as though they were stood next to us. Upon our return we met in the Main Lounge for the start of our Tauck Academy. The Cruise Director, Jeremy, gave an introduction to the ship, its facilities and life aboard the M.S. Treasures. At 7pm the M.S Treasures departed the beautiful city of Budapest where we were able to get some stunning photos from the Sun Deck whilst the commentary was taking place. After this we ate in the Compass Rose, the main dining room on Deck 1 which is open dining. The food was superb and the atmosphere in the restuarant was very relaxed. The waiters were very attentive and friendly. After our meal we headed to the Main Lounge for the evening entertainment. 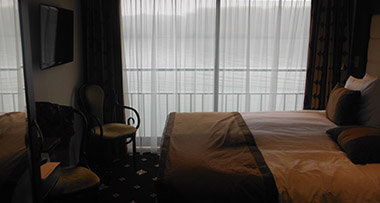 After a wonderful night's sleep in my very well appointed cabin, which was a category 4 French Balcony on Ruby deck, I felt refreshed and looking forward to my day ahead. A light breakfast is available in the Bistro which is on Deck 3 aft between 6am - 10am, or you can have a full breakfast of everything from cereals and continental breakfast to a fry-up in the Compass Rose between 7am - 9am. I, of course, opted for the full breakfast! After breakfast we headed to the Sun Deck to witness the Gabcikovo Lock. The M. S. Treasures was raised an impressive 65 feet. For the rest of the morning we started our training modules in the Main Lounge, which was then followed by a full buffet lunch in the Compass Rose. The ship arrived in Bratislava at about 1pm and shortly after we disembarked for a guided walking tour with an excellent guide and of course our Voxes. After this we had some free time to explore on our own, which led some of us to a local bar to sample the local beer. Once back on board there was time for a quick shower with the great Molton Brown toiletries provided before heading to the Compass Rose once again for dinner, which is waiter service. All drinks are included with Tauck. After dinner we were entertained in the Main Lounge by a local group called the Funny Fellows, and then by the Wojtek the ship's pianist. At about 10.30 we left the beautiful Bratislava and headed for Durnstein. 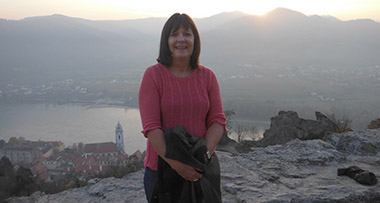 We had an early start today in the Main Lounge for our Tauck training modules after another full breakfast. This was followed by lunch in the Compass Rose before we went on the Sun Deck to enjoy the commentary and beautiful scenery of the Wachau Valley. The day had started with a thick fog which had finally cleared to leave glorious sunshine and spectacular views. We disembarked the ship in Durnstein, which was like stepping back in time. Some of us walked to the remains of a famous castle, which had once held King Richard the Lionheart captive, where we had stunning views all around. The walk however is somewhat of a hike with many steps and areas of difficult walking and not suitable for those who cannot walk any distances. It took about 20 minutes up, but was well worth the effort. After this we experienced wine tasting at the Alte Klosterkellar, a local wine cellar where we sampled some of the region's best known varieties. After this we returned to the M.S. Treasures for another wonderful dinner in the Compass Rose. Our evening entertainment was given by the Tauck Team and was a fun night. At approximately 11pm we left Durnstein and headed to Vienna our final destination. 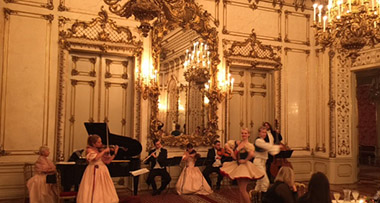 After breakfast in the Compass Rose we boarded our coach for our highlight tour of Vienna. We drove along the famous Ringstrasse and saw many of the Imperial sights through the fog. We then had a guided tour on foot of the Hofburg Palace which was well worth a visit. After this we had free time in Vienna. We did some shopping and, of course, had to stop at the Cafe Sacher for some Sacher Torte, which was delicious. We returned to the ship and then had our Tauck Academy Final Exam before getting ready for dinner at the Palais Pallavicini, hosted by Prince Eduardo. This was a spectacular evening with opera and ballet whilst we dined in the magnificent dining room. We enjoyed good food and plenty of wine before returning to M.S. Treasures for our final night. After a night cap in the Main Lounge it was bed time as we had an early start the next morning for our journey home.

After a final breakfast in the Compass Rose we disembarked and said goodbye to new friends we had made and the wonderful staff on board, for whom nothing was too much trouble. We were transferred to Vienna airport by taxi ready for the flight home.

I had a truly wonderful time with Tauck and have many memories of beautiful places. All Inclusive really does mean All Inclusive. The M. S. Treasures is a lovely ship and the cabin accommodation was excellent along with the food and staff. A truly memorable trip!

If you are interested in a Tauck river cruise, why not speak to Sharon or our other cruise specialists today on 01234 326 758