Koningsdam: A Pinnacle of Excellence

Amy recently spent a weekend in Amsterdam with Holland America, visiting M.S. Koningsdam; not just the new ship in their fleet, but a whole new class of ship. Here's what Amy thought...

It was a busy day in the port of Amsterdam when I went to visit Holland America's newest addition to their fleet, M.S. Koningsdam, which was launched earlier this year in April and christened by her godmother, the Dutch Queen Maxima, the wife of King Willem-Alexander, the first king the Netherlands has had in over 100 years, and the ship's namesake. Amsterdam is perhaps one of the busiest hubs for European river cruising, often used as a starting or ending point for river cruises (a popular itinerary for many is between Amsterdam and Budapest, linking the Rhine and Danube rivers and cruising through the heart of Europe), and that Sunday was no different, with at least five river vessels in dock nearby. M.S. Koningsdam, a medium-sized ocean cruise ship carrying 2,650 guests, cut an impressive contrast. 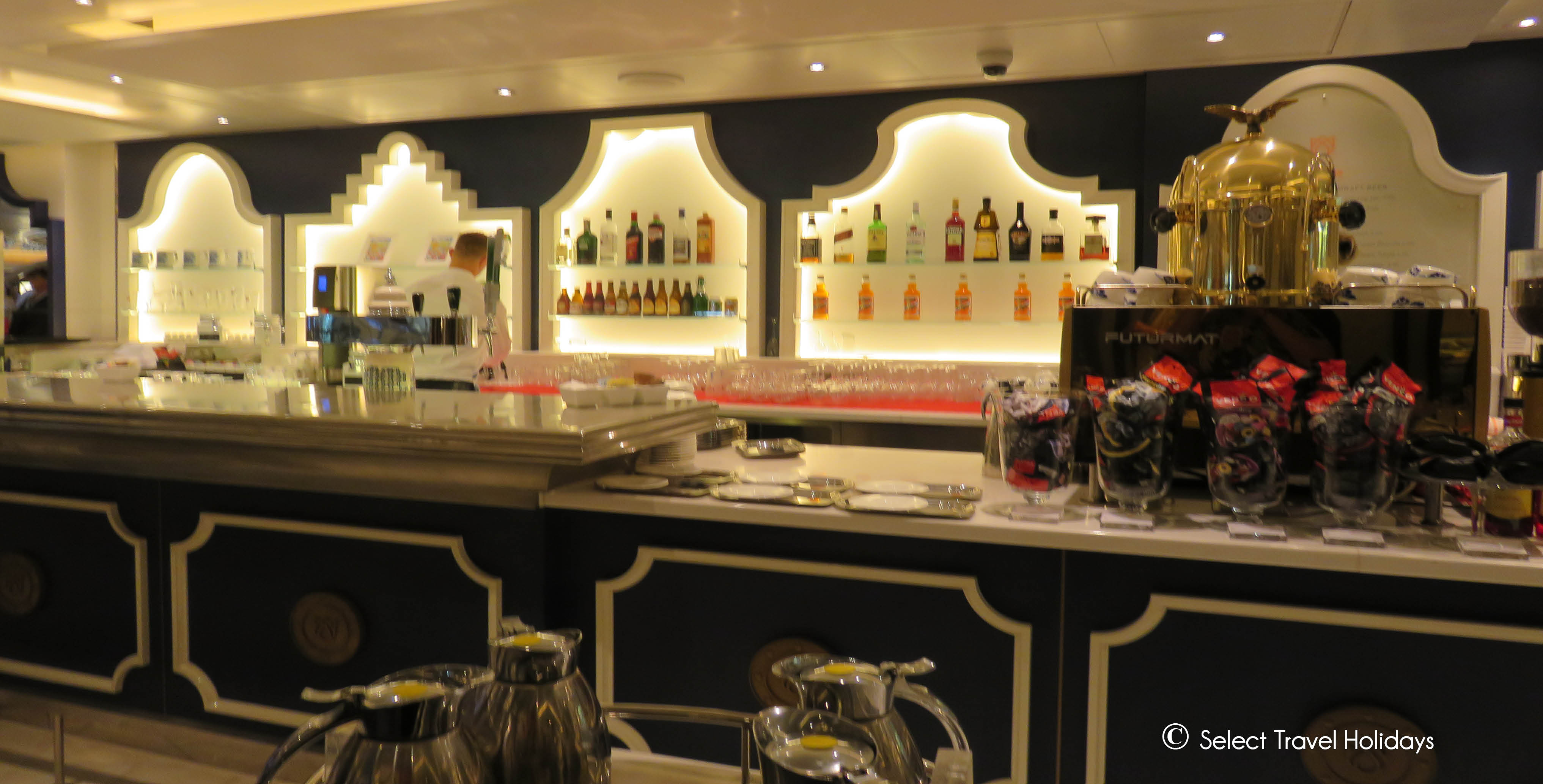 Once onboard, I was struck by the Atrium - a traditional feature found in many cruise ships, but with an unique and very contemporary twist, inspired by the ship's designers' (Adam D. Tihany and Bjørn Storbraaten) focus on the concept of music throughout the ship. Koningsdam's atrium was filled with plenty of open space, and fluid curves - another recurrent design theme - and somehow seemed to open out even further. Below the Atrium, there's a 'destination area', one of the new features introduced onboard, and different to the customary shore excursions desk, with independent experts available to give passengers advice about each destination; ideal for the independent traveller, who prefers to do their own thing ashore, and ideal for Holland America guests, who tend to prefer a destination focus. Another new feature which could be found on the second deck of the Atrium itself was the Grand Dutch Cafe, a beautifully designed, open cafe/bar area very Dutch in theme, with a particular emphasis on the famous pottery town of Delft. The Grand Dutch Cafe is just one of many nods to Holland America's proud Dutch heritage, which dates back to the 1870s when the company first operated ocean liners taking Dutch emigrants to the USA. Other acknowledgments of the Dutch heritage were perhaps more subtle, including some splendidly arranged tulips (after all, Holland America is famous for their onboard flowers).

The destination area and Grand Dutch Cafe were, of course, not the only new features introduced on Koningsdam. The addition of Koningsdam heralds a new class of ship for Holland America, the pinnacle class, an aptly named class for what promises to combine all that Holland America has stood for - tradition, nautical heritage, and the cruise line's signature service and style - while upping the ante to its high point. The heritage is continued, and there are many features which remain, while new ones are introduced and due to be rolled out across the fleet.

Perhaps one of the most fun and innovative new features is Blend, which promises to be an unique experience (there's certainly nothing else like it on the seas), where guests learn to blend their own red wine, at a tasting session led by the ship's wine expert, thanks to a partnership with Washington State's oldest winery, Chateau Ste. Michelle. Guests' blended creations are bottled up for their own consumption onboard, at dinner or in the privacy of their stateroom.

The partnership with Chateau Ste. Michelle is just one of many which enhances guests' cruising experience. Other partnerships include BBC Earth, the Lincoln Centre for the Arts (another new feature onboard Koningsdam is the Lincoln Centre Stage, where guests can enjoy intimate classical music performances), Billboard, Copart Cress, and the world-famous Rijksmuseum. The day before my ship visit, we were taken for a tour of the Rijksmuseum, and I must admit I was completely blown away by the experience; our guide, Carien, really brought the artwork and the artists to life, giving an impassioned narrative to each painting we saw, and shaping it with the both the general historical context of the time, and the context of the artist's career at that point. She drew us in, and encouraged us to interpret the work for ourselves. From my own experience, I have no doubt that this partnership with the Rijksmuseum, where experts from the museum are onboard to give lectures on the art housed in the museum, will bring a truly enhancing and educative onboard experience for guests! 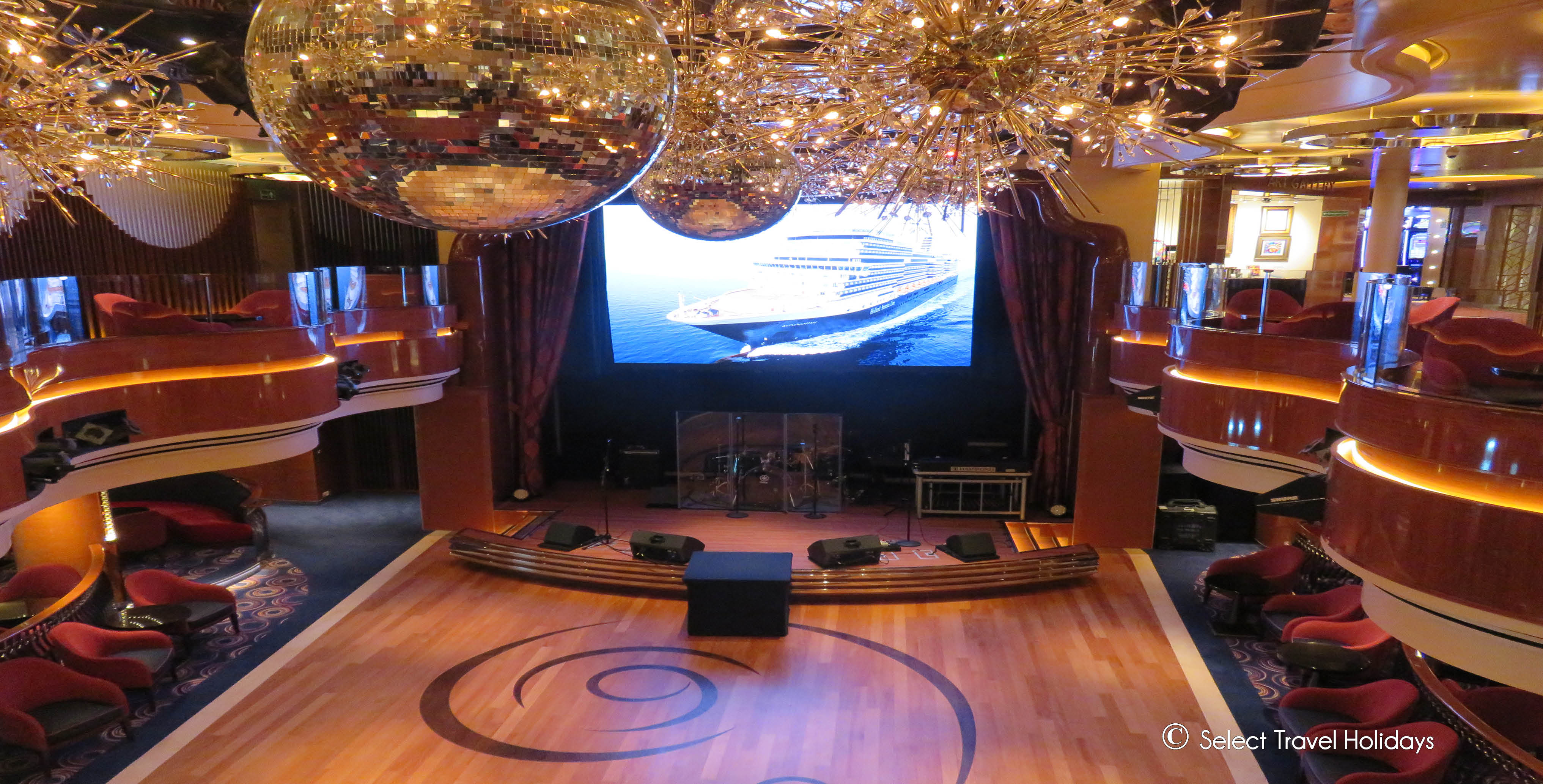 Holland America also continues its relationship with BB King's Blues Club, which it established before the blues legend's death. On Koningsdam, head to the stunning Queen's Lounge for a wonderful night of entertainment, where an eight-piece band showcase the best of blues and Memphis, and there's plenty of space to dance the night away, or simply take in the show. While the Queen's Lounge is a prominent feature across the fleet, again with Koningsdam it has been re-imagined as a double level venue, warm with woods and curves, and some truly striking disco balls and light features. You'll find the largest dance floor on the ship here, and this venue is also used to host tea dances. Holland America's partnership with Billboard gives the ship access to all the hits of the last fifty years, including music videos, which has been used to adapt their shows to be more relevant to guests, so you'll find entertainment based on music beloved by those generations in their 50ies, rather than the traditional cheesy cruise style of entertainment. With the wrap-around LED screens in the Show Lounge, music videos and artists can be projected to add an extra special and thrilling dimension to evening shows, allowing the ship's singers to 'duet' with major stars, such as Whitney Houston. The partnership has also brought Billboard Onboard, an unique and interactive entertainment experience on stage, where live musicians, including guitarists, a pianist and a DJ, play fifty years of chart-topping hits that you'll know and love. Billboard Onboard, the Lincoln Centre Stage, and the Queen's Lounge are three very different stages offering different aspects of music and entertainment, so there's truly something for everyone. Close by, there's Notes - nothing to do with music, despite the name! - another new feature, and one to appeal to whisky lovers, as it offers the chance to taste and sample a multitude of whiskies. 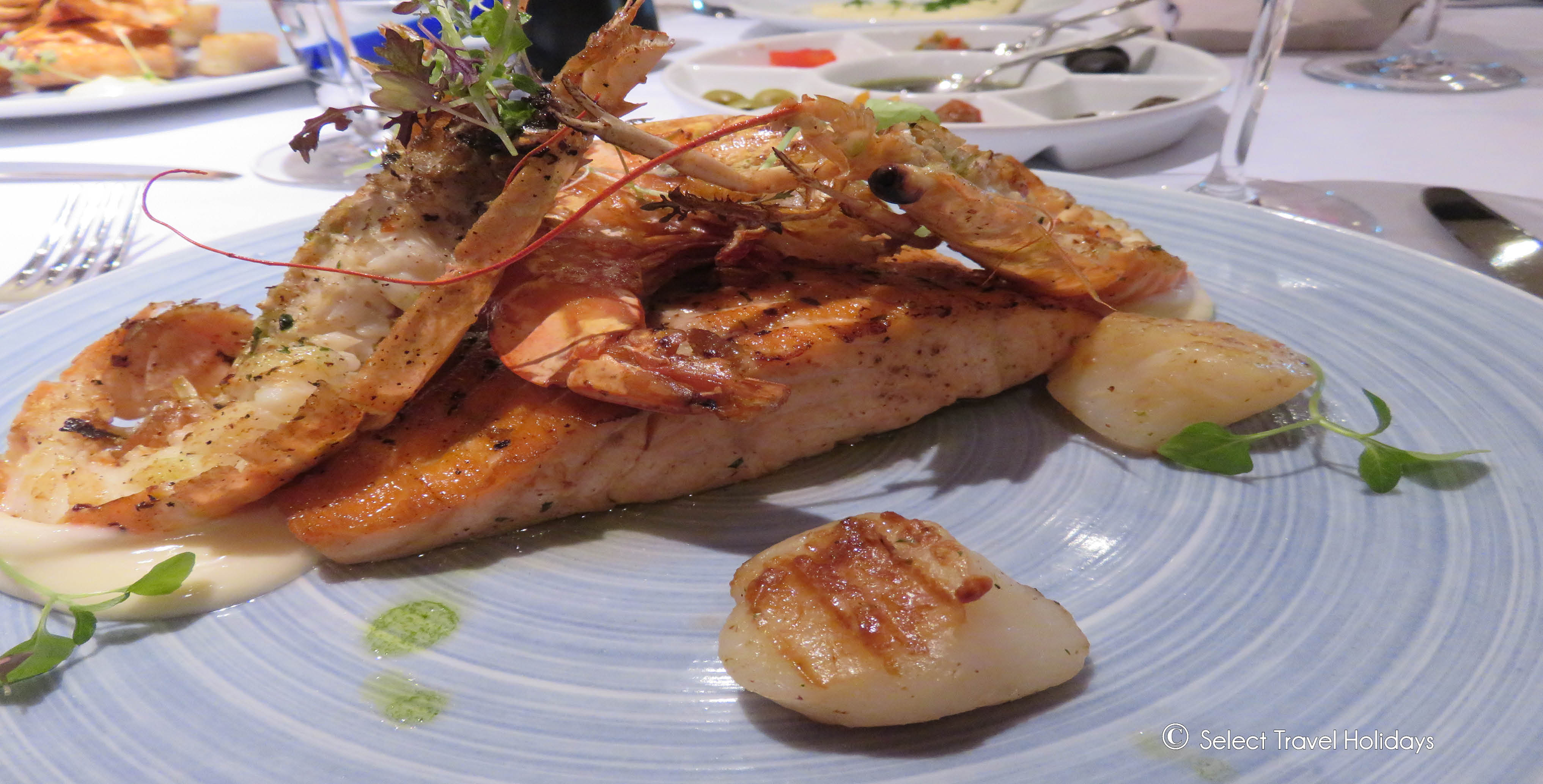 Although Koningsdam is the largest in the fleet, with a capacity up to 2,650 guests, and there are a variety of new features, there's still a lot of continuity with the other classes of ships in the fleet - most notably the high levels of personalised and friendly service, which Holland America prides itself on; although I was only on the ship for a few hours, and before most of the guests had checked in, every time we came across a member of staff, they were friendly and courteous, and during our lunch at the wonderful Sel de Mer (itself a new addition, an à la carte speciality restaurant offering a contemporary twist on classic French seafood in an intimate setting), the staff were very attentive (the food itself was delicious, especially my langoustines, which were positively succulent and mouth-watering). 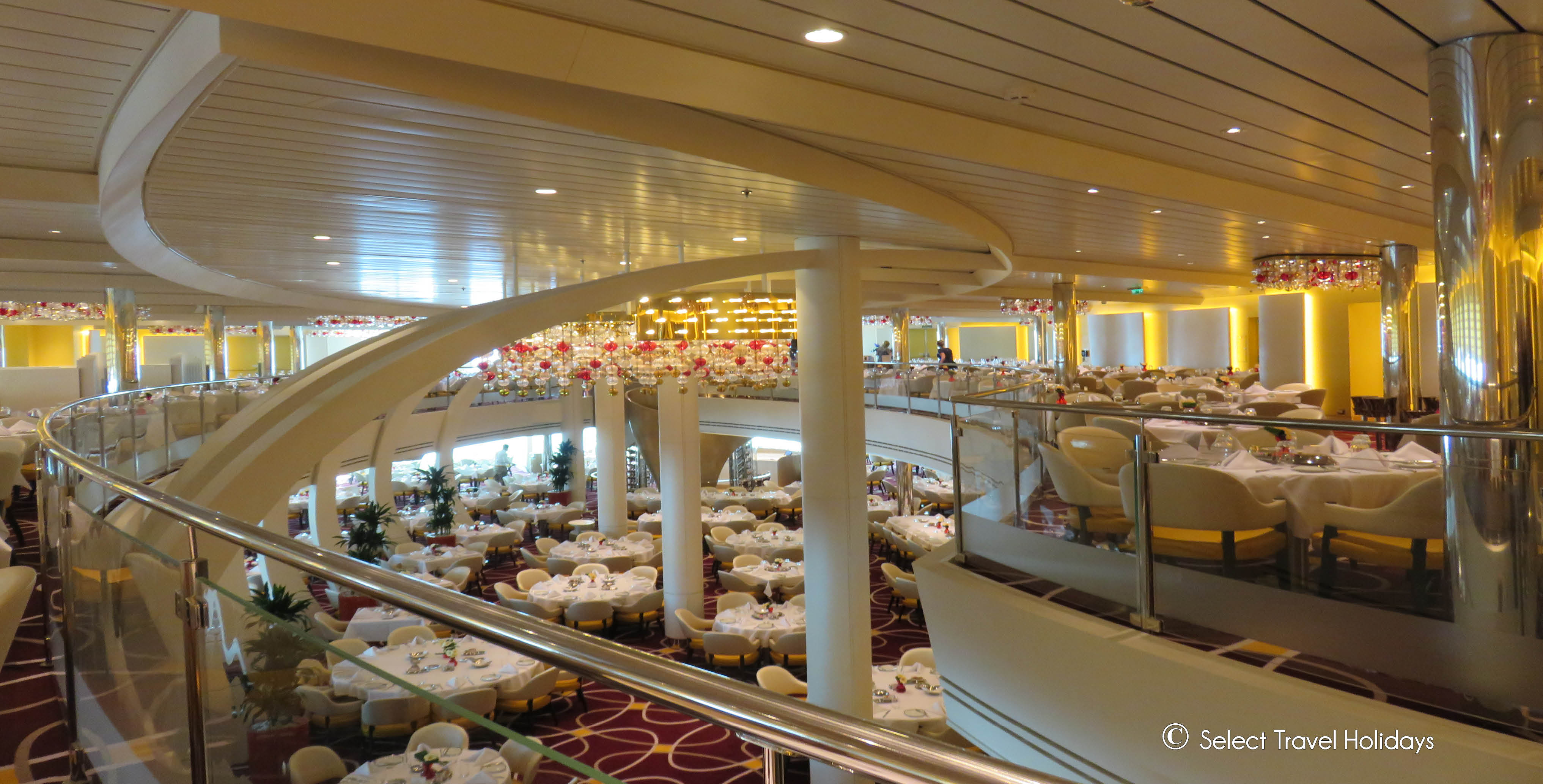 During the ship visit, I had the opportunity to have a peek into some of the ship's many, and varied, restaurants. The main restaurant was impressive; like most of the Holland America fleet (except Prinsendam), it covers two decks, with guests opting for traditional fixed dining times seated on the top tier, and offers up panoramic views on three sides, and is characterised by soft colours and lighting, airiness, and a somewhat curved design. Onboard speciality restaurants include The Pinnacle Grill - available fleetwide - which is best known for its succulent steaks from the famous Double D ranch in Washington, and where service is ramped up to silver service, and the pan-Asian eatery, Tamarind, including a newly introduced sushi bar. While Holland America has long pioneered the onboard Culinary Arts concept, since they first introduced 'ready steady cook' kitchens on their fleet fifteen years ago and offering cookery classes and demonstration threatre-type cooking, they've upped the ante yet again on Koningsdam, where guests for the first time can dine at the Culinary Arts Centre, enjoying a five-course meal served with organic wine, and watching the chef at the hatches as he explains what he's doing. There's even 'pop-up restaurants' where the Pinnacle transforms into Le Cirque once per cruise. Casual dining venues included the Lido Market, which offered an expansive buffet selection reflecting the cuisine on offer in the main restaurant, and - while the Lido Market is on all the ships in the fleet - Koningsdam has tweaked the concept, creating distinct areas for food. An alternative informal dining venue onboard was Canaletto, offering authentic Italian dishes designed to share, inspired by the Italian concept of spartire, and available at a small cover charge of $15. There's also a poolside grill for delicious burgers, but - again, new for Koningsdam - a New York Deli and pizzeria by the pool, offering up something entirely different. 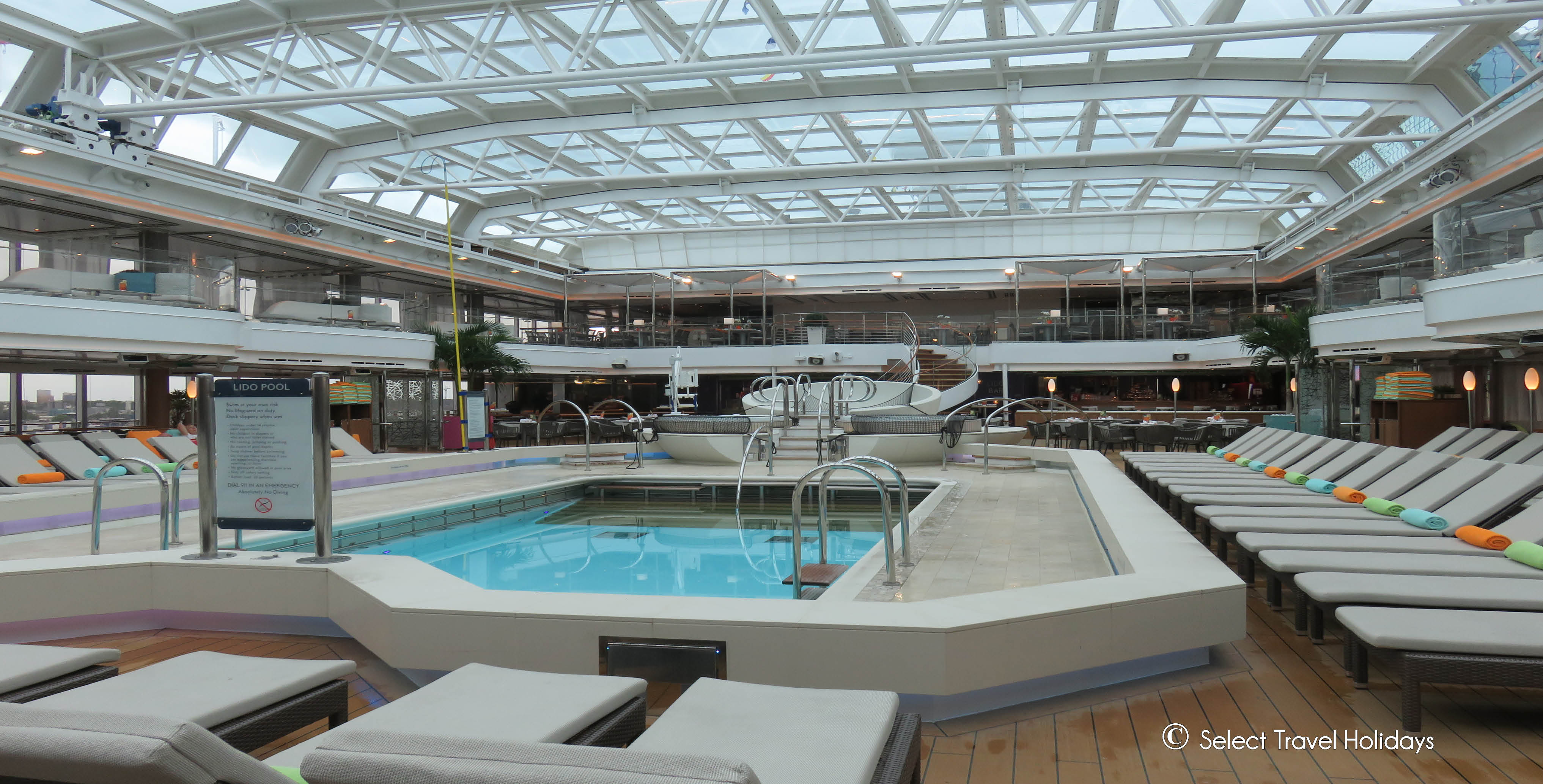 Onboard, there are two pools; one outside, and the main pool featuring a magrodome which has been expanded into two levels (unlike the single level magrodomes on the other Holland America ships), creating an airy, spacious, glass-enclosed space, with a mezzanine level, and an invitingly serene ambience. However, there are plenty of other areas to indulge in relaxation and tranquility, most notably the Retreat, where you can hire private gazebos, discreetly attended by waiters, enjoying champagne and chocolate strawberries, or the Greenhouse, the Asian-themed spa run by Steiner in London, or the Hydropool. I felt that all these areas had a serene ambience, and while I usually prefer to relax in the privacy of my own balcony on a cruise, and 68% of the onboard accommodation have balconies, I thought that the private gazebos in the Retreat were a nice touch as an alternative, and a different way to treat yourself.

We had a look at a variety of different cabin categories, and I thought that even the inside cabins were spacious. Each of the cabins and suites we saw were very well appointed, and light, and all feature Elemis toiletries.

I was genuinely impressed by this ship - crisp, clean, airy and spacious, beautifully designed, incredibly friendly staff, and a real selection of enticing restaurants and onboard facilities, I would happily enjoy a cruise on Koningsdam. Just find me in Blend.