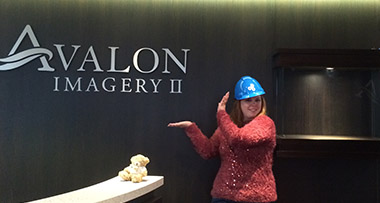 Next Spring, Avalon Waterways will launch two new river vessels: Avalon Imagery II and Avalon Passion. Rachel and Amy (and, of course, Bedford Bear) were recently very privileged to join a ship yard visit near Amsterdam where these vessels are currently under two different stages of construction. Both will have two decks of 200sq ft cabins with wall-to-wall windows which, when opened to three-quarters the width of the room, will transform to an inside balcony.

River vessels over 110m are built in two separate halves before being welded together. Parts such as propellers are built (or repaired) in a specific ‘preparations hall’ in the shipyard. On average, it takes about 12 months to fully complete the building of a river vessel, although if it is a completely new design (i.e. it’s not a repeat order) then it will take a few more months to complete. River cruise operators are constantly tweaking their ships, learning from what worked well with their existing fleet, and what could be improved based on their guests’ feedback and their cruise directors’ experience, and by working in partnership with the shipyards.

Avalon Passion is currently in a much earlier stage of construction than Avalon Imagery II, and it was fascinating to go inside what was effectively a shell of a ship, with wiring and insulation padding everywhere. But there were also the beginnings of a recognisable ship, such as the staircase and even where the staterooms would be, with some having their own walls and partitions for bathrooms. A couple staterooms already had their French balconies! By the time of completion, she will be able to carry 134 passengers on the Rhine and Danube.

Avalon Imagery II is much further along, and even has some furnishings – it was recognisably an Avalon Waterways river vessel, with the long bench tables in the restaurant and the bed positioned at an angle to get a better view of the scenery outside. One of the improvements Avalon have added for these ships is a second coffee making facility in the bar and lounge, which changed the designs for the bar’s positioning slightly. We were even able to look into the galley (a long-held dream for Amy), the crew quarters – where we learnt that because the crew do not have any recreational areas in the public areas outside and are not allowed to smoke on deck, they have an inside smoking area with very good extractor systems – and the bridge. When she is launched, Avalon Imagery II will have capacity to carry 104 passengers along the Rhine.

For further photos, why not check out our special photo album on our Facebook page?

We have no doubt that Avalon Passion and Avalon Imagery II will be wonderful additions to the Avalon Waterways family, as these two new-generation suite ships take to the rivers. If you are interested in an Avalon river cruise, why not contact one of our dedicated cruise specialists today on 01234 326 758